So you want a baby, eh? There are a few ways to go about breeding your Magesc character with another.
​Read this short guide to help understand how breeding works within Magesc.

Here at Magesc two characters can breed in order to cross their DNA and create a child that looks like both parents. This takes both of the characters races and looks into account when the new apprentice is born. There are two different types of breeding that you should be aware of. The first is official breeding and the second is breeding via role play.

​In order to breed an official character, you must obtain a breeding slot when they become available. Check out our artist availability blog to see if there are any available breeding slots.

One thing to note about breeding, however, is that both magescian characters involved in the breeding must be at least adept stage in order to do so. The adept stage is considered a teenager, and, although looked down upon by magescian society, it is still viable to have a baby during this stage. However, it is better to wait until the character is an adult at their expert or even master stage to get the most out of your breeding. 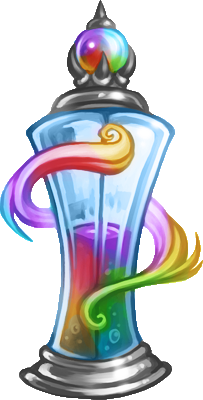 Official breeding will result in art of your character's child as well as them becoming their own official character (with stats, journal, and their own inventory if you decide to register them on the forum). They become another character you can grow. These official characters do not, in the role play setting, even need to be related to the characters that bore them. This is more out of character (OOC) breeding than anything for an official character.
​
But, there is a catch. Breeding can only occur between two different sexes (a male and female for instance) in order to create a baby. Because of this, the wonderful alchemists of Magesc have also learned to craft the Potion of Choice (pictured) which allows you to change your character's biological sex to male, female, or genderless.

When 'genderless' is chosen, your character will be able to breed with any other character, regardless of sex. Think of genderless characters as the "dittos" of Magesc. Genderless characters typically stay looking a bit more male or female depending upon what they were prior to the potion being used, but can also grow a bit more androgynous as well if that's what you desire. This potion can be purchased at Peddler's Rock.

Role play is a great way to bring two characters together and allow them to fall in love or just have a one night stand. However you decide to go about it, breeding via role play is a bit different than official breeding.

You may have your character become pregnant or have a baby anytime you wish throughout their in character life (as long as they are adept and above, as these are the teenage years). However, this doesn't mean you will actually be able to get official art of the child once it's born. You can draw the art yourself, but it won't become an official character in Magesc in the same way as official breeding without commissioning the artwork from a Magesc hired artist.

In this case, the child would end up being a side-character to your current official one until commissioned. However, breeding via role play does have its benefits. It allows you to really control the look of a character or breed (or even adopt) with an NPC of your own choosing and later down the line be able to commission a custom piece by one of our artists to make that character Magesc official (with the ability to have stats, have an inventory of their own, and be able to grow like any other character).

Breeding is the only way to obtain a hybrid character in Magesc. Hybrids, as stated in the lore, are characters born of two (or more) different races. They have the added benefit of being able to choose two different classes (if asarei & raguati), a class and a clan (if raguati/asarei & dovaa), or have access to two different clans (if khehorian & dovaa), These characters gain access to all of the special abilities of their chosen class or clan and are allowed to pick any three to take into battle with them. There are a few combinations of hybrids to choose from as stated previously.
Raguati + Asarei Hybrids: These hybrids are probably the second most rare in Magesc as the couple would have to be completely okay with the whole Romeo and Juliet scenario. Oftentimes the parents would be exiled from their strongholds and not allowed to return under any circumstances. Though you can't always help who you fall in love with. This combination will offer a variety of different traits to a hybrid character. The character could have asarei wings and a dark raguati complexion or could be a character with bright skin but no eyes. They will be able to choose two classes as well when breeding with each other as they gain access to both sides of magic or double down on two weapons. Either way, they are able to learn multiple disciplines in order to take on the world that has scorned them.

​Dovaa + Raguati/Asarei Hybrids: Breeding with dovaa is a lot more common typically within Magesc, as the dovaa are seen as the intermediate third race and the war is not waged with them directly. However, breeding outside of ones own race is still looked down upon regardless. Dovaa hybrids can end up being a lot more forgiving and can even pass for full blooded dovaa more than any other type of hybrid. These hybrids have the opportunity to choose a class and a clan, as they have both dovaa and raguati/asarei blood in them. They can become very powerful healers (by being asarei, choosing to become a mage along with a healing clan -- like ysali or peisio) or very powerful destructive mages (by being raguati and choosing the mage class along with a more destructive clan -- like firani or kiandri). They could also very well be something completely different by choosing the blade, blunt, or ranged class along with a clan. The options are nearly endless.

Khehorian + Magescian Hybrids: You may be thinking that it wouldn't work, but you're wrong! Khehorians are the feral khehora who have become masters of their own magic and given their humanoid form. In this form, they can even breed with a magescian as strange as it may sound. Khehorian hybrids are always humanoid and are born with their khehora parent's clan from the start. They can also choose a secondary clan if they are breeding with a dovaa or a class if they are with a raguati or asarei. These combinations are the rarest of all, but have the potential to be much more powerful. This is due to the fact that the character is born with magic from the start unlike any other type of magescian.